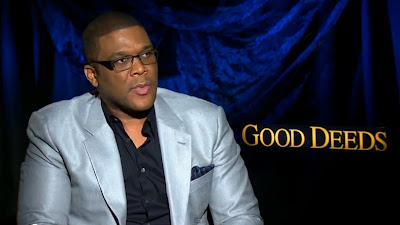 Award winning journalist Shawn Edwards sits down with Tyler Perry to discuss his newest movie, his wealth and what ‘Good Deeds’ he has done lately. Over the course of eight years as an actor, writer, director and producer, Tyler Perry has entertained and inspired audiences with his trademark mix of crowd-pleasing broad comedy and rousing inspirational drama. Now, with the release of his twelfth film, TYLER PERRY’S GOOD DEEDS, the filmmaker tackles a new genre: the romantic drama. The part marks Perry’s first dramatic role away from his ensemble-based films and places him front and center as leading man. While Perry is no stranger to headlining his films — his starring comic turns as the irreverent pot-smoking grandma Madea are a cornerstone of his enduring popularity — the role of Wesley Deeds, a successful businessman whose seemingly perfect life is upended by an unlikely new friendship, marks a milestone for the actor: a romantic, plain-clothes role that calls for the most personal, unvarnished performance Perry has ever given. “You give me a costume and I’m comfortable behind that costume, whatever that is,” says Perry. “If it’s an old man, if it’s an old woman, fine, I can do that. Just give me something to hide behind. Playing Wesley is the first time I feel like I’ve been exposed. I’m a very private person, and with this role I felt like my entire life had to come to work with me.” While TYLER PERRY’S GOOD DEEDS is in no way autobiographical, Perry admits that Wesley’s journey is one he knows well, a familiarity which only served to raise the stakes for him as an actor. “A lot of the situations in the film are similar to things I’ve gone through, so in order to be this guy, I really had to surrender to it,” he reveals. “It wasn’t an easy decision for me. The truth is, had I not done FOR COLORED GIRLS, which was the scariest thing I’ve ever done in my life, I wouldn’t have had the courage to try this.” “This is probably the most we’ve seen of the real Tyler,” adds co-star Gabrielle Union. “He’s bringing all of his life experiences to the role, and it informs the character in ways I think are completely unexpected and original.”