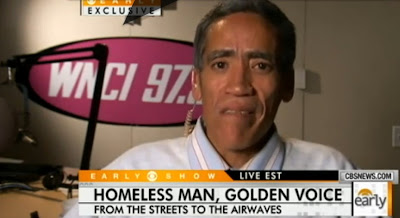 Ted Williams, a homeless US man with a deep, refined voice has become an overnight online sensation after being “discovered” by a local reporter on a street corner in Columbus, Ohio. The 53 year-old has now been offered a job by the NBA’s Cleveland Cavaliers and is being pursued by NFL Films for possible work. Williams said the team had offered him a two-year contract and said they would pay his living expenses. Williams was recently living in a tent and whose past includes a lengthy list of arrests. He has served time in prison for theft and forgery and has been cited with numerous misdemeanours, including drug abuse. In New York, Williams’ mother Julia was thrilled her only child was turning his life around.