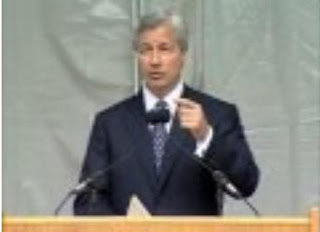 James “Jamie” Dimon (MBA 1982), chairman and CEO of JPMorgan Chase & Co., who has been listed by the Financial Times as one of the leaders most likely to lead the world out of the financial crisis, offered wide-ranging words of wisdom and advice to members of the Harvard Business School MBA Class of 2009 at Class Day exercises on the HBS campus. Also attending were family members, friends, and other guests of the almost 900 graduating students.

Focusing first on career management, Dimon reminded the class of the importance of lifelong learning and building a reputation-a personal brand-for hard work, integrity, and trust, among other qualities. In a sense, he said, a book is put together about each of us as we go through life, and “you can choose the way you want the book to be written.”

As leaders face the challenges and opportunities of life, he continued, emotional intelligence is as important as brain power. “IQ alone won’t get you through tough times.” A dose of toughness was also part of the prescription Dimon proposed. People in positions of responsibility are bound to take some heat along life’s way, he noted, quoting Theodore Roosevelt’s observation that players are the ones who are criticized, not the spectators in the stands. He also underscored the importance of maintaining work-life balance. When it comes to family, he said, there is no such thing as quality time without an equal amount of quantity.

Moving on to the leadership of organizations both big and small, Dimon noted first the sense of responsibility he felt as a CEO: “If I make a mistake, I can hurt a lot of people,” he said, from the bank’s employees to its stockholders and stakeholders. He then discussed the wide array of attributes that every leader needs:

– Self-discipline, a work ethic, and a dedication to continuous improvement
– Fortitude and a penchant for action
– The ability to set high standards of performance and integrity. “Compare yourself to the best,” he advised, “and treat other people the way you treat your parents. Do the right thing, not the expedient thing.”
– Analytical skills that take a hard, honest look at all the facts, including “things we’re not doing well.”
– A willingness to share information with others and to use it as the basis for making the right decision. For that to happen, everyone a leader works with should feel free to engage in open, uninhibited conversations and discussions. “Have many truth tellers around you, not just one.”
– A sense of the importance of loyalty, meritocracy, and teamwork in the context of the success of the entire organization. If someone is not doing the job, loyalty to organization trumps loyalty to the individual, Dimon explained.
– A feel for a firm’s morale – something that can be severely damaged by organizational bureaucracy and politics
– Respect for everyone at every level, from the CEO on down
– A skill set that can “get compensation right” based on hard work and contributions to the company, including helping other employees. Long-term deals for CEOs and other top executives don’t pass muster with Dimon (“I shouldn’t have to bribe you to join us.”), nor do compensation programs that automatically penalize failure. Leaders should be able to adjust for the fact that a person tried but ended up being wrong, he said.
– A sense of humility, based on the acknowledgement that no one rises to a leadership position without the help of others, beginning with one’s parents.

The final portion of Dimon’s remarks dealt with the leader’s obligations to companies and society. JPMorgan is a “caring company,” he said. “We give away $100 million a year, we pay the salaries of employees who have been called to military service, we send money and aid when disasters strike around the world,” but at the same time, Dimon pointed out, “all these good deeds are predicated on the fact that my colleagues and I keep JP Morgan healthy and vibrant. Success is not a given.”

Dimon urged the HBS graduates-to-be to play a role in helping make effective public policies that contribute to spreading wealth, not destroying it. There is a great need to make the planet better, he said. On the other hand, current energy policy, he believes, skirts the one solution that will work, namely taxation, and half the children in US inner cities don’t graduate from high school. Much needs to be done in these and other realms. “I hope that I’m leading my life in such a way so that when I’m gone, people will say that the world is a better place for my having been here,” he concluded.