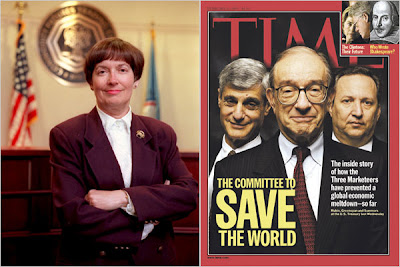 The Go-Go ’90s
Alan Greenspan rules the economy and “the less regulation, the better” is the administration’s attitude toward Wall Street.
11:32

Brooksley Born Arrives on the Scene
She heads up the Commodity Futures Trading Commission and sees danger in a new, highly-lucrative market: over-the-counter derivatives.
11:55

“Get This Lady Off Our Backs”
Brooksley Born’s idea to regulate derivatives meets swift and fierce opposition from the Clinton economic team.
8:10

The “Earthquake”
After Born tells staff to take the first step in regulating derivatives, the powers that be in Washington go to war to stop her.
4:40

1998 – Born’s Warning Becomes a Prophecy
High-flying hedge fund LTCM nearly melts down. Some in Congress clamor for regulating derivatives. But Greenspan is unyielding.
9:14