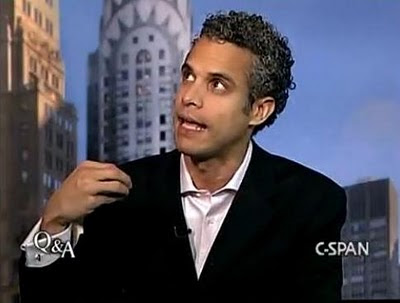 The guest on C-SPAN’s Q&A is technology analyst Omar Wasow, co-founder of BlackPlanet.com

Omar is an internet analyst who appears frequently on radio and television. Wasow tutored Oprah Winfrey in her first exploration of the Net in the 12-part series Oprah Goes Online.[1] He is co-founder and strategic advisor for the social networking website BlackPlanet.com.

In 1995, Wasow was proclaimed by Newsweek as one of the “fifty most influential people to watch in cyberspace.” Around 1999 or 2000, Wasow introduced Oprah Winfrey to electronic mail in a series of 12 appearances on her television show. In 2003, Wasow appeared in an Apple, Inc advertisement discussing their latest operating system at the time Mac OS X Panther.

Wasow is currently working on his doctorate at Harvard University in African-American Studies and political science. In a 2009 interview with Brian Lamb, Wasow stated that he had started at Harvard in 2005.

Wasow is a graduate of Stuyvesant High School in New York City, where he was President of the Student Union. He then graduated from Stanford University in California with a BA degree in Race and Ethnic Relations